Posted on May 2, 2018 by sycamoreshoalstn 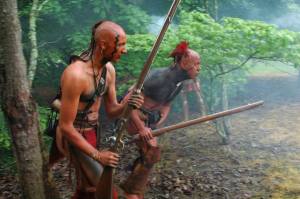 On Saturday, May 19th and Sunday, May 20th, Sycamore Shoals State Historic Park will host nearly 200 living history re-enactors for the annual Siege of Fort Watauga. Colonial, British, and Native re-enactors will converge at the re-created Fort Watauga at Sycamore Shoals to relive the days when America’s first frontier was the land beyond the blue ridge.

The Siege of Fort Watauga is a live retelling of the Cherokee attack brought upon the settlers of the Watauga valley in the summer of 1776. At Sycamore Shoals, Fort Watauga offered protection to nearly 200 settlers during a two-week siege led by Cherokee War Chief, Old Abram, and 300 warriors. 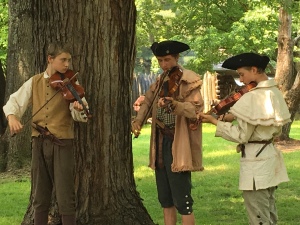 Sycamore Shoals will once again be the scene of war during the Siege of Fort Watauga. The event lasts from 10:00 am to 4:00 pm on Saturday, May 19th and 10:00 am to 3:00 pm on Sunday, May 20th. Step back in time as you visit the fort, militia camps, British encampment, and Native American camp. Be immersed in the 18th century as you witness daily aspects of colonial frontier life. See the clash of two cultures as the attack on fort Watauga is recreated at 1:00 pm on Saturday and 2:00 pm on Sunday. Also, attend our auction of 18th century reproductions on Saturday.

During the event, take advantage of colonial merchants selling period wares in “Sutler’s 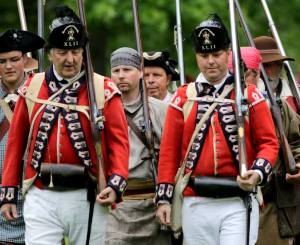 Row”. There will be several vendors offering a myriad of 18th century reproduction items for the colonial enthusiast or the primitive decorator. Vendors this year include “Johnson & Moffet” specializing in hand crafted wooden items and herbal remedies, The Virginia Floorcloth and Textiles Co offering hand painted canvas floor coverings and block printed neckerchiefs, Ft. Vause Outfitters specializing in finished leather goods, Windhil Woolens offering hand processed and dyed woolen goods such as yarn, blankets, and clothing, and several other vendors offering everything from 18th century reproduction clothing, weaponry, and original antiques, to replica housewares and military accouterments. Food vending and concessions will also be available for purchase from the Friends of Sycamore Shoals State Historic Park. 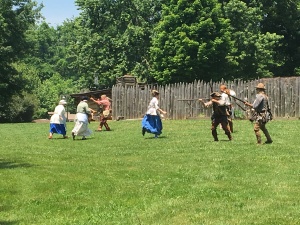 Several Revolutionary War living history units will be in attendance and will make the 18th century come to life during the weekend. Units include the 1st Maryland based in Hendersonville, NC, Musgrove’s Mill Militia and the South Carolina Rangers based in upstate South Carolina, and British units; the 42nd Light Infantry, the 71st Highland Regiment, and the British Legion. The host unit is the Washington County Regiment of North Carolina Militia based at Sycamore Shoals State Historic Area. Also, enjoy musical entertainment from The Sons of Liberty, Faire Wynds, and the Watauga Valley Fife & Drum Corps. Numerous individuals also participate in the event portraying many 18th century walks of life including Cherokee Natives, Backcountry Hunters, Farmers, Housewives, Indentured Servants, Commoners and Gentry.

A special addition to this year’s event is an evening concert on Saturday, May 19th featuring the talents of the Watauga Valley Fifes & Drums, the official fife and drum corps of the State of Tennessee. During the concert corps members will showcase traditional and martial music of the 18th century on fife and drum as well as individual performances on other traditional instruments. This is a great opportunity to be entertained and educated by a truly talented group of young performers and historians. The show begins at 7:30 pm at the Fort Watauga Amphitheater. Admission to the concert is $5/Adults, $3/ages 7-17, and children 6 and under are free. Concert tickets will be available during the daytime events at the park as well as before the concert. Proceeds will benefit the Watauga Valley Fifes & Drums in their mission to promote the cultural heritage of our area through music and historic interpretation. 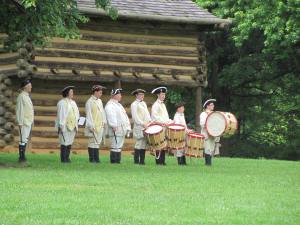 For more information on this and other exciting events at Sycamore Shoals please contact the park at 423-543-5808 or visit the park’s website at www.sycamoreshoalstn.org. Admission to the event is free so bring the entire family and see how your ancestors played a crucial role in our region’s history and in the formation of our nation. Witness the 18th century come to life, hear the rattle of muskets, smell the campfire smoke, and come “Share in the Glorious Cause of Liberty” at the Siege of Fort Watauga. This event is sponsored by The Washington County Regiment of North Carolina Militia and The Friends of Sycamore Shoals State Historic Area. 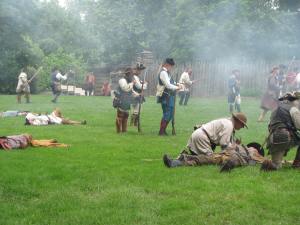 Concert tickets will be sold during the daytime events at the park as well as before the concert.

Ongoing Activities Throughout the Weekend

This entry was posted in Siege of Fort Watauga. Bookmark the permalink.

This site uses Akismet to reduce spam. Learn how your comment data is processed.