Posted on January 26, 2020 by sycamoreshoalstn 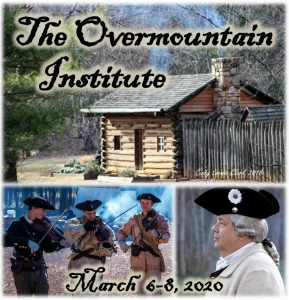 On March 6th through 8th, Sycamore Shoals State Historic Park will hold the second annual installment of the popular event entitled “The Overmountain Institute”. This new approach to sharing the regions rich cultural heritage gives participants the chance to get a closer more in-depth look at life on the 18th century frontier with a focus on the area known as the Watauga Settlement in the late 1700s.

Sycamore Shoals will be partnering will several skilled heritage interpreters, living historians and expert craftsmen who will bring life in the 18th century Watauga settlement to new light through a series of demonstrations, workshops, seminars, and hands on activities. Gain a deeper understanding and appreciation for the lives, hardships and accomplishments of the early settlers and native Cherokee who called this area home over two centuries ago.

The weekend activities kick off on Friday, March 6th at 7:00 pm with an after-hours

presentation entitled “Finding Ourselves on the Frontiers” – An Evening with Captain James Robertson. Chad Bogart will portray early settler and militia leader James Robertson, and share an incredible first person account of experiences in the Watauga Settlement as told by the man who would later be known as the Father of Tennessee! Chad has presented living history programs and historic character demonstrations at over 60 local, state, and national historic sites for the past twenty three years. He serves as the Museum Curatorial Assistant at Sycamore Shoals State Historic Park. A reception and light refreshments will follow the presentation.

Saturday, March 7th will be filled with six, one-hour presentations on unique aspects of life in this area over two centuries ago. Sycamore Shoals is proud to host these skilled heritage interpreters who present life on the 18th century frontier in such a way that participants cannot help but feel as if they have actually touched the past. Saturday’s presentations include the following;

“Skrimshaw – 18th Century Powder Horn Art” presented by Steve Ricker. Steve is well known for his fine handcrafted powder horns, hunting bags, knives, and other 18th century accouterments. He will share the age old skill of scrimshaw, the beautiful scrollwork, engravings, and carvings done in bone, ivory, or horn. Steve is from Greeneville, TN and serves as the interpretive program director for the Overmountain Victory Trail Association. 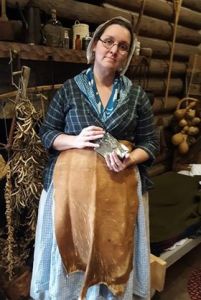 KY where she works as an 18th century foodways interpreter at Fort Boonesborough State Park. Emily will portray Betty Harper and will share the skills and travails of a frontier midwife.

“Men of Measure – Surveying in Colonial America” presented by Mel Kent. Mel is a resident of Fort Mill, SC. After 20 years of Civil War reenacting and a move to South Carolina he started reenacting the colonial period in 2009. Since he discovered surveying, he has found a period vocation that satisfies all his interests in history, science, and antique shopping for period equipment. Mel will explain the equipment and techniques of the colonial era surveyors. 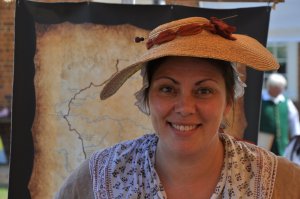 “Frontier Fashion – Basic Attire of the late 18th Century” presented by Melodie Daniels. How can we really know what our ancestors wore? Using a variety of primary sources, Melodie will walk you through a display of 18th century reproduction clothing for gentlemen, ladies, and children. Melodie is a homeschooling Mom from Limestone, TN who has a passion for history education and all things 18th century.

“Overmountain Melodies – The Music of the Frontier” presented by The Sons of Liberty. Brothers Daniel, Noah, and Joshua Smith, from Jonesville, VA, began reenacting and playing the music of the eighteenth century in 2014. They have a ten-year background in classical violin performance and offer a unique sound enriched by their dynamic arrangements of traditional American songs.

comes to us from Hickory Ridge Living History Museum in Boone, NC where he serves as a historic interpreter. Taylor will portray Maj. Gen. Nathanael Greene and give his perspective of the Revolutionary War in the south.

The Overmountain Institute is designed to engage all five senses. As part of the Saturday experiences, participants will be treated to an 18th century inspired lunch cooked over the open hearth which is included in the ticket price. Guests may also choose to pack their own lunch or elect to eat off site at one of the many restaurant options in town.

Sunday, March 8th may be the last day of the institute, but it will not be short of activities. The day will begin at 11:00 am with a frontier worship service held within Fort Watauga. The rest of the day will be dedicated to ongoing demonstrations, displays, talks, and presentations of daily aspects of colonial frontier life. Feel free to spend as much or as little time as you like with an array of knowledgeable regional heritage educators and living history interpreters. Also, visit our award winning museum, and shop in our well stocked book and gift shop.

The Overmountain Institute is limited to 50 participants. The fee to attend is $50.00 per individual and covers all three days of activities and an 18th century inspired lunch on Saturday. To register please visit liberty.ticketleap.com/omi2020/ .You do not want to miss this opportunity to meet and learn from some of the most gifted living history educators in the community. Come see how you can make history and “…share in the glorious cause of Liberty” at Sycamore Shoals State Historic Park.

The Overmountain Institute is sponsored by the Friends of Sycamore Shoals State Historic Park and the Washington County Regiment of North Carolina Militia.

7:00 – “Finding Ourselves on the Frontiers” – An Evening with James Robertson

An incredible first person account of experiences in the Watauga Settlement as told by the man who would later be known as the Father of Tennessee!

2:00 – “Overmountain Melodies” – The Music of the Frontier: presented by the Sons of Liberty

Posted on December 18, 2019 by sycamoreshoalstn

Christmas isn’t over yet! Come to Sycamore Shoals State Historic Park and see how our 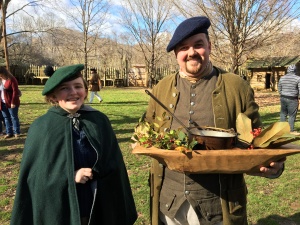 colonial ancestors celebrated a holiday called “Old Christmas”. In Colonial America, Christmas was celebrated as a twelve day holiday with many traditions and customs. Does The Twelve Days of Christmas sound familiar? These twelve days of feasting, and merrymaking ended on January 5th or “Twelfth Night” with a grand celebration.

On Saturday, January 4th from 10am-3pm and Sunday, January 5th from 10am-3pm the Washington County Militia will hold their annual Old Christmas Celebration. As you walk through the gates of Fort Watauga you will travel back in time to an 18th century Old Christmas “Jollification”. Each cabin in the fort will be the setting of Christmas, New Year, and 12th Night traditions as celebrated by the settlers of different cultures on the colonial frontier. Many of our modern Christmas customs are taken from centuries old practices such as English Christmas Guns, the Irish Holly Wreath, the German Tannenbaum, Scottish First Footing, and the Dutch Sinterklaas. See how our Christmas practices of today are steeped in these old world traditions. 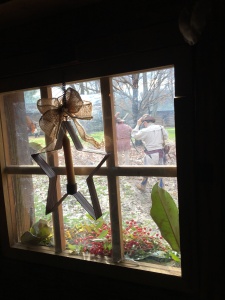 Get the most out of the Holiday Season and visit Sycamore Shoals State Historic Park for a fun, entertaining, and educational family outing. Arrive ready to be filled with the spirit of Christmas. It’s an event that is sure to become a tradition with your family year after year. Sycamore Shoals State Historic Park is located at 1651 W. Elk Avenue in Elizabethton, TN. For more information contact the Park at 423-543-5808 or visit our websites at http://www.sycamoreshoalstn.wordpress.com or http://tnstateparks.com/parks/sycamore-shoals.

Posted on November 13, 2019 by sycamoreshoalstn

Come join us for a festive, old fashioned time at Sycamore Shoals featuring

There will be a special activity/project the whole family can participate in making and Santa will also be making an appearance!

Come do some of your Christmas shopping at our new Gift Shop or with the Vendors that will be set up for the day! Don’t miss out on getting some unique, one-of-a-kind items you won’t be able to find anywhere else!

We look forward to seeing you!